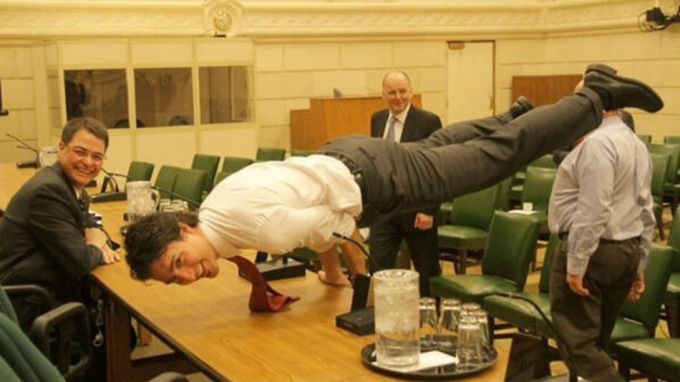 Sigh, what a dreamboat!!! Gosh, can we import him and export that &@$$ Drumpf? Please!

http://mashable.com/2016/03/29/justin-trudeau-yoga-namaste/#ch8K0DDqs5qoBY HEIDI MOORE
We know many things about Canadian prime minister Justin Trudeau: his inclusiveness on gender and race, his strong faith in the American people, his warmth toward refugees, his ability to ignite the world’s best bromance with President Obama.

Less well-known about Trudeau is his impressive upper-body strength.
The slim Trudeau, who is 6’2″, balanced only on his wrists on a table, achieving a yogi-approved “peacock pose,” or mayurasana.
The pose is a powerful one — even besides the biceps required — because the peacock represents “big things, like immortality and love,” in Hindu lore, according to Yoga Journal.
The pose has a rich mythology based on the theme of peacocks destroying snakes that represent human flaws and attachments. It also has an extensive range of detoxifying physical benefits, according to athletic wear brand Athleta, which says “this pose strengthens the digestive system, stimulates metabolism, and purges your body of toxins by massaging the digestive organs, increasing the blood circulation, and strengthening the core.”
While it’s not clear when or where the picture of Trudeau was taken — the blurriness suggests it’s a bit old — it was given viral new life by a Facebook post by Canadian yoga teacher David Gellineau.
Trudeau tweeted it himself in 2013.

Naturally, it also shows off the polymath abilities of Trudeau, a Renaissance man whose personal traits seem all the more appealing to many Americans given the dire state of the 2016 election.
There are other examples of Trudeau’s aptitude for Eastern movements.
In 2015, he and his wife Sophie did tree pose — with Trudeau in a full suit — impressing Canadians and yogis alike by maintaining excellent form, keeping their feet away from their knees.
Trudeau has also showed off his physical abilities by dancing to bhangra, or Indian music, credibly enough to impress some Canadians of Indian descent and become a sensation in India. (The full video is at this link, with Trudeau entering at around 9:25 minutes in).
Trudeau’s abilities run in the family, it seems. There is a popular, widely circulated picture of his late father, former Canadian Prime Minister Pierre Trudeau, doing the same peacock pose.
There’s a long history of world leaders showing off their physical prowess, from Vladimir Putin’s shirtless hunting and workouts to Barack Obama’s jogging video with vice president Joe Biden, not to mention his beachgoing pictures.
The strongman displays tend to be a bit retro, however — weights, shirtlessness — and Putin seems to avoid yoga, losing out on an opportunity to get a little more zen.
Once again, Trudeau shows himself to be on the right side of history. We say namaste.
BONUS: How to move to Canada