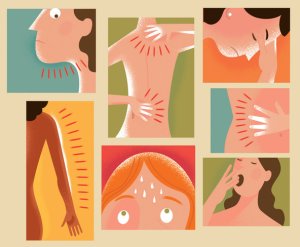 This article hits me right in my heart. They might as well have written this article about my mother. Everything that is in this article was true about her. She had a massive heart attack. She did not recognize it as such. She thought she was having a panic attack. She did call 911 or go to the hospital. She experienced panic, shortness of breath, non specific pain in her torso. She was a doctor, an OB/GYN. But she had these symptoms for possibly days before she told me she wasn’t feeling well and certainly before she called her friends, the husband was the head of the Cardiothoracic department of a big hospital in Buffalo NY. She called them and when they got to her home, she was on the verge of crashing. Of course they immediately called an ambulance and she was taken to the CCU. She never recovered. She stayed in the CCU for six weeks, underwent awful procedures, withstood terrible pain, as did we, her three children, who were by her side every minute, and she finally passed away. She was 66 years of age. We were devastated. It was a life changing event for all three of us. So I’m posting this, even though it is not a mental illness. But if women read this and know the symptoms and the risks, then perhaps what happened to my mother, the doctor, won’t happen to them.

Women’s risks and symptoms of an impending heart attack are very different than men’s. Until recently, we all knew the crushing chest pain and the pain traveling down the left arm as symptoms of heart attack. But those men’s symptoms, women experience heart attack as a pain in the neck,  jaw, shoulder or abdomen, they experience right arm pain, and shortness of breath or nausea.

My mom also suffered from depression and anxiety and had Lupus, some of the risk factors mentioned in this article. She didn’t go to the hospital. If she’s gone to the hospital earlier, there is no reason she wouldn’t have survived. Her heart recovered, but all her other organs failed, probably due to the anoxia they experienced while her heart was weakened during and after her heart attack. I miss her so much. She was a remarkable woman, getting her MD in India in 1960. She was brilliant, a gourmet cook, an amazing gardener, a singer, a brilliant OB/GYN and surgeon, she loved poetry, she designed her own house. She loved us, her three children and three grandchildren to the moon and back. I miss her, we all miss her. Her obituary, which my brother wrote is below: https://www.facebook.com/notes/samina-zaineb-raza/my-mother-sabahat-ahsan/10152753718111892

Attention, American women, especially young women: Have you got the heart to save yours?

Although long thought of as a man’s disease, heart disease afflicts as many women, though women tend to develop and die from it about 10 years later. And while coronary mortality rates have declined over all, there are signs that the disease, its precursors and its potentially fatal consequences are increasing among young women.

A 2007 study in The Journal of the American College of Cardiology referred to the rise in cardiovascular risk factors among young women as “the leading edge of a brewing storm.”

While so many women worry about cancer, only slightly more than half realize that heart disease is their No. 1 killer, according to the Centers for Disease Control and Prevention. More women in the United States die from cardiovascular causes — heart disease and stroke — than from all forms of cancer combined.

Numerous campaigns by the American Heart Association and other organizations have raised awareness among women of their mostly self-inflicted risks and of symptoms that are typically far more subtle in women than in men.

“Even if they believe they’re having a heart attack, 36 percent don’t call 911,” said Dr. Holly S. Andersen, director of education and outreach at the Perelman Heart Institute at Weill Cornell Medical College, citing the latest heart association national survey. “Women are more likely to wait when they have symptoms and, when they get to the hospital, say that they have indigestion, not chest pain — a big mistake.”

Rather than crushing chest pain, women in the throes of a heart attack more often experience discomfort in the neck, jaw, shoulder, upper back or abdomen, dizziness, nausea, right arm pain, shortness of breath, and sweating or unusual fatigue. Almost two-thirds of women who die suddenly of a heart attack had no prior symptoms.

Doctors too often fail to take a woman’s risk seriously and treat it aggressively, or to provide adequate recommendations for prevention, Dr. Andersen and other experts say. “This is especially true for young women,” she said. Yet, she added, “among women between the ages of 29 and 45, it looks like the incidence of heart disease is rising.”

There are ample reasons. Stress, for example, is a known, though not often cited, risk factor, “and the youngest women in this country are more stressed than ever,” she said. “They’re always ‘on’ and self-comparing.”

Smoking — marijuana as well as cigarettes — is a coronary risk. And while smoking has declined among older women, “young women are the ones still smoking,” Dr. Andersen said. Women on birth control pills who smoke are especially at risk.

Two other major risk factors, obesity and diabetes, are more rampant than ever, especially among Hispanic women born in the United States, half of whom develop diabetes by age 70.

“We’re good at treating heart disease, but we’re failing at prevention,” Dr. Andersen said. As Dr. Nanette K. Wenger, a professor emeritus at the Emory University School of Medicine,noted in 2010, the steady annual decline in heart disease deaths among women since 2000 resulted more from better care than from prevention.

“A particular unmet need is prevention at younger age, the subset of women less likely to undertake preventive behaviors,” she wrote. Yet decades ago, heart disease was found to originate in the teenage years or early 20s and gradually worsen unless preventive measures were undertaken.

When women with high levels of artery-damaging LDL cholesterol are prescribed statins, the treatment often provides “false reassurance” that the drugs “can compensate for poor dietary choices and a sedentary life,” Dr. Rita F. Redberg, a cardiologist at the University of California, San Francisco, and editor of JAMA Internal Medicine, wrote last year. In one study she cited, “statin users significantly increased their fat intake and calorie consumption, along with their B.M.I. (body mass index), in the last decade. Focusing on cholesterol levels can be distracting from the more beneficial focus on healthy lifestyle to reduce heart disease risk.”

A diet rich in fruits and vegetables, which contain natural antioxidants that statins don’t provide, is more important, Dr. Andersen said. “So is getting regular aerobic exercise, spending time with friends and getting a good night’s sleep — six to eight hours,” she said. “Chronic lack of sleep doubles the risk of heart disease.”

Coronary risk is also greater among women who carry extra weight around the abdomen — the so-called apple shape. Abdominal fat is metabolically active and can result in high blood pressure and diabetes, even if a woman is otherwise slender.

A positive outlook on life — laughing a lot, having a sense of humor, being optimistic and seeing the glass as half full — is also protective, Dr. Andersen said, adding that “15 minutes of laughter is equivalent in preventive value to 30 minutes of aerobic exercise.”

Although “marital stress increases a woman’s risk of coronary heart disease,” having a compatible partner or a pet is beneficial, she said.

Several factors that women may experience early in life, especially two pregnancy-related conditions — pre-eclampsia and gestational diabetes — have been linked to a greater coronary risk years later. Additional risk factors now emerging for women include migraines with aura and inflammatory diseases like lupus and rheumatoid arthritis.

Two other conditions more prevalent among women cause symptoms that are often overlooked by them and their doctors as likely due to heart attack. Women are more prone to develop blockages in the small vessels that feed the heart, which can cause pressure or tightness in the chest rather than crushing pain, according to the National Heart, Lung and Blood Institute.

They are also far more susceptible to “broken heart syndrome”brought on by events like the sudden loss of a loved one, the loss of a job or money, divorce, a bad accident, a natural disaster, or even a surprise party. The resulting intense stress reaction of chest pain and shortness of breath, although usually temporary, can mimic a heart attack, though it rarely causes one.

2 thoughts on “Heart Attack Symptoms In Young Women from NYTimes”