One of the worst things to happen to anyone is to lose a precious, beloved family member to suicide. I know. I lost my 26 year old brother, Farooq, in 1991. It is not something that you ever get over. The loss, the emptiness, the heartache, the guilt, the devastation, they never go away. The “if only I’d …” been there, done this, held on to his hand so he couldn’t have walked away, the if onlys, they never go away. I wasn’t even in Buffalo when it happened. If only I’d been there, I may well have been able to help him. I would still give my right arm to have him here with us, with his beautiful, endearing smile, his goofy jokes, his sweetness, his sensitivity, his love.

September is Suicide prevention month. This article from NAMI is an excellent article, with a great amount of information to help people who are thinking of suicide, hotlines, it also has information for people who are friends or family of someone who is thinking of suicide. I hope my posting this will help people, will prevent this devastating loss from happening to people. Read on.

“September 2015 is also known as National Suicide Prevention Awareness Month which helps promote resources and awareness around the issues of suicide prevention, how you can help others and how to talk about suicide without increasing the risk of harm.

Suicidal thoughts can affect anyone regardless of age, gender or background. Suicide is the third leading cause of death among young people and is often the result of mental health conditions that effect people when they are most vulnerable. Suicidal thoughts and suicide occur too frequently but should not be considered common and can indicate more serious issues. In many cases the individuals, friends and families affected by suicide are left in dark, feeling shame or stigma that prevents talking openly about issues dealing with suicide.

On September 10, 2015 we observe World Suicide Prevention Day to reach out to those affected by suicide, raise awareness and connect indiviudals with suicidal ideation to treatment services. It is also important to ensure that individuals, friends and families have access to the resources they need to address suicide prevention.

What else can I do?

We believe that these issues are important to address year round. Highlighting these issues during Suicide Prevention Awareness Month and World Suicide Prevention Day provides a time for people to come together and display the passion and strength of those working to improve the lives of the millions of Americans that can benefit from honest discussions about mental health conditions and suicide. In fighting for those living with mental illness there is still much more that needs to be done and more ways to get involved.

If you or someone you know may need a mental health assessment, anonymous online tools are available. Learn more and help yourself or someone you care about. 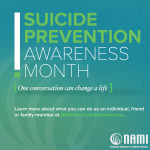