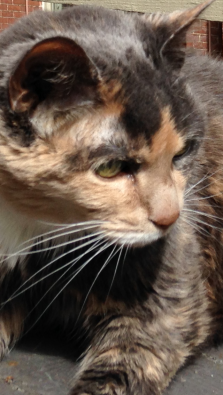 Oh boy! Say it ain’t so! I’ve had cats since 1986. I love cats! I wonder what you do if toxoplasma really does cause anger issues, why don’t cat owners get tested and treated? Apparently, Azithromycin, a common antibiotic, treats toxoplasmosis.

Uncontrollable, explosive bouts of anger such a road rage might be the result of an earlier brain infection from the toxoplasmosis parasite, an organism found in cat feces, a new study finds.

In the study of more than 350 adults, those with a psychiatric disorder called Intermittent Explosive Disorder, or IED, were twice as likely to have been infected by the toxoplasmosis parasite compared with healthy individuals with no psychiatric diagnosis.

The study adds to a growing body of evidence suggesting that toxoplasmosis — usually a mild or nonsymptomatic infection from a protozoan parasite called Toxoplasma gondii — may somehow alter people’s brain chemistry to cause long-term behavior problems. Previous studies have linked toxoplasmosis to schizophrenia, bipolar disorder, impulsivity and suicidal behavior.

The researchers stressed, however, that they merely have identified an association between toxoplasmosis and rage, and cannot say that toxoplasmosis causes rage — or that people should get rid of their cats, for that matter.

“Not everyone that tests positive for toxoplasmosis will have aggression issues,” said Dr. Emil Coccaro, a professor and chairman of psychiatry and behavioral neuroscience at the University of Chicago, who led the study. But exposure to the parasite does appear to “raise the risk for aggressive behavior,” and more research is needed to determine whether the link is causal, and what, if any, the underlying biological mechanism may be, he said.[The 10 Most Diabolical and Disgusting Parasites]

The study was published today (March 23) in the Journal of Clinical Psychiatry.

More than 20 percent of the U.S. population has been infected by theToxoplasma parasite, according to the Centers for Disease Control and Prevention. Cats are the only known host in which this parasite reproduces; cats shed the parasites’ eggs, called oocysts, in their feces. Humans can become infected after unintentionally ingesting the microscopic oocysts, primarily from not their washing hands after cleaning a cat’s litter box or working in a garden with contaminated soil. Other sources of Toxoplasma are undercooked meat or unwashed vegetables that have been contaminated.

Toxoplasma can cause severe neurological problems and death in infants infected through their mothers during pregnancy, which is why pregnant women are advised not to change a cat’s litter box.

Coccaro told Live Science he was intrigued by the body of scientific literature linking toxoplasmosis with psychiatric disorders. For this study, his research team recruited 358 adults. About one-third had IED, defined by the Diagnostic and Statistical Manual of Mental Disorders as recurrent, impulsive, problematic outbursts of verbal or physical aggression disproportionate to the situations that trigger them. Another one-third were individuals diagnosed with another psychiatric disorder (not IED). And the remaining third were healthy controls with no psychiatric history.

Jaroslav Flegr, a professor of biology at Charles University in Prague in the Czech Republic who was not involved in the study, said this was a confirmation observations made by his research team over the last two decades.

“We have found that prevalence of toxoplasmosis correlate positively with violence-associated injuries and mortality in particular countries,” said Flegr, who was among the first to propose that Toxoplasma can alter the brain. “It correlate also with diseases burden associated with bipolar disorder, obsessive compulsive disorder, and epilepsy. [10 Things You Didn’t Know About the Brain]

All the researchers were at a loss, however, to explain how the infection could be tied to behavior.

“We don’t yet understand the mechanisms involved,” said Dr. Royce Lee, also of the University of Chicago, a co-author on the report. “It could be an increased inflammatory response, direct brain modulation by the parasite, or even reverse causation where aggressive individuals tend to have more cats or eat more undercooked meat.”

Coccaro said that inflammation is a leading theory. Toxoplasmosis triggers the body to create antibodies, which are proteins that recognize specific pathogens and initiate the natural inflammation process to fight infections. After being ingested, Toxoplasma can travel to the muscles and the brain. In the brain, Toxoplasma can hide inside cells, and trigger an inflammatory response that damages nerve cells as the immune system attempts to kill the Toxoplasma.

One of the limits of the study, he said, was that his team could only assess the presence of antibodies in a blood sample, not a brain fluid sample. Future research may reveal the presence of Toxoplasma in the brain of those with IED, which could point in the direction of causation.

Or, conversely, doctors could treat IED patients for Toxoplasma infection to see if their symptoms reverse, Coccaro said.

Follow Christopher Wanjek @wanjek for daily tweets on health and science with a humorous edge. Wanjek is the author of “Food at Work” and “Bad Medicine.” His column, Bad Medicine, appears regularly on Live Science.