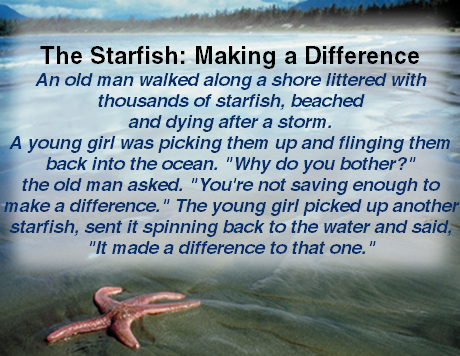 Day before yesterday, as I was driving on Bardstown Rd, I saw a man standing by the side of the road with a sign that read “Hungry, please help.” My son and I had talked about this, if we saw something like this, what we’d do. And we had come to the conclusion that we would take a person with a sign like this to an eatery and buy them food. With that in my mind, I stopped and parked my car, walked over to the gentleman and said “I saw your sign. Please pick one of the two food places behind us and I will buy you a meal.” He immediately turned around and starting looking at the two places, one was Rally’s and the other one, I don’t remember what it was, but he picked the other one. We went inside, I asked him to pick anything from the menu, and bought him two meals. I gave him, the miraculously in my purse, $20, (I NEVER have cash on me, but this $20 must have had his name on it!) and was about to leave, when I thought it would be a good idea to ask for his phone number so I could give him any job leads I found. While inside, he told me he had worked as a food service worker in fancy restaurants in Louisville, he had also driven a fork lift, and had some experience with computers. He had taken early retirement and was only getting $900/month, recently he had lost both his part time jobs, and had to move because of deplorable conditions in his apartment which the landlord refused to correct. And now, all of a sudden, he found he didn’t have enough money to eat. So I decided to ask my friends to see if anyone knew of something he could do. He told me his name was Alfonzo, and gave me his cell phone number. Yesterday, I asked my friend about any leads for a job for Mr. Alfonzo. My friend gave me a name and number today, when I tried to call Mr. Alfonzo, someone named Larry answered! I asked him if he knew anyone named Alfonzo, but he said no. My heart sank. I had meant to help Alfonzo as much as I could, but now I couldn’t help him at all. Either I’d punched in the wrong number in my phone or he’d given me the wrong one. I looked back at the situation as it was happening, and I remembered how truthful and honest Alfonzo had seemed. How clean and gentlemanly he’d been. I decided I had written down the wrong number, because he did not, not in the least, seem like someone who lied. The first three digits of the number were 345- ####, so I decided to try 435-#### and guess who answered? Yes, Mr. Alfonzo!!! I gave him the job lead and asked him to call the place. I also told him that I had other friends looking out for more leads. He thanked me profusely, as he had done when I bought him the meal. He seems like such a sweet old man, fallen on hard times.

I know this isn’t about me, it is about helping a man who finds himself in unfortunate circumstances. But it was very difficult for me to realize that I didn’t have his number. I am always afraid, terrified, panic stricken at the thought of losing someone, what the heck does that even mean? Yeah, who knows… but I suspect this fear has its roots in having “lost” my father at about 5 years of age, and then having lost my brother, or maybe it’s just a human fear of loss and of being alone. So my heart plummeted when I found myself with the wrong number, I had been afraid of it all along, that I’d written down the wrong number, and in this instance, my worst fear was realized! So what did I do, did I give up? No, I cried for about 2 minutes, then decided to look at the number to see if I’d gotten it wrong and if I could try a few combinations of it and see if I would get the right one. And the very first thing I tried, it worked!

Ok, I know, I’ll be careful. I will not give Mr. Alfonzo my home address, obviously not, I will not meet him anywhere in the dark, and I will not empty out my bank account and give all the money to him, haha. This man is honest, he is in no way a crook or a charlatan, he is simply a man fallen on hard times. And all I’m going to do is help find him a job. And yes, it is only one man I’m helping, not all of humanity, but for this one man, I hope I will be making a difference!

4 thoughts on “Making a Difference?”