Depression is associated with the lateral orbitofrontal cortex which is the nonreward center in the brain. It also affects the area which is involved in sense of self. So sufferers feel the sense of loss and disappointment associated with not getting a rewards, and also feel a sense of loss of themselves and low self esteem. Sound familiar? It seems that there would be over activity of the nonreward center and underactivity of the area responsible for sense of self and these (and other factors) would lead to depression. Again, depression is a physical disease, and as we find out more about its causes, it will hopefully be able to be treated much more effectively soon! 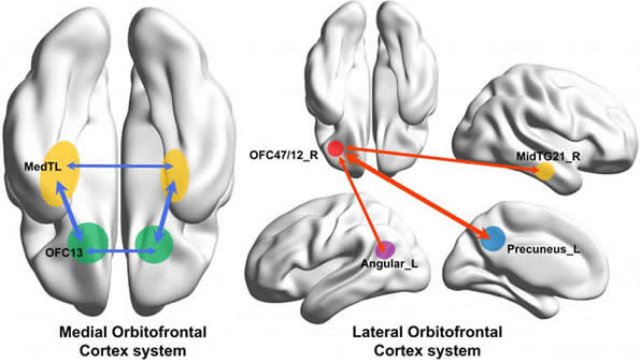 This area of the brain, which becomes active when rewards are not received, is also connected with the part of the brain which is involved in one’s sense of self, thus potentially leading to thoughts of personal loss and low self-esteem.
Depression is also associated with reduced connectivity between the reward brain area in the medial orbitofrontal cortex and memory systems in the brain, which could account for sufferers having a reduced focus on happy memories.
These new discoveries could herald a breakthrough in treating depression, by going to the root cause of the illness, and helping depressed people to stop focussing on negative thoughts.
The study has been carried out by Professor Edmund Rolls from Warwick, Professor Jianfeng Feng from Warwick and from Fudan University in Shanghai, Dr. Wei Cheng from Fudan University, and by other centres in China.

Learn More: Mindfulness treatment as effective as CBT for depression and anxiety

In a particularly large study, almost 1,000 people in China had their brains scanned using high precision MRI, which analyzed the connections between the medial and lateral orbitofrontal cortex—the different parts of the human brain affected by depression.
Feng comments that depression is becoming increasingly prevalent: “More than one in ten people in their life time suffer from depression, a disease which is so common in modern society and we can even find the remains of Prozac (a depression drug) in the tap water in London.”
“Our finding, with the combination of big data we collected around the world and our novel methods, enables us to locate the roots of depression which should open up new avenues for better therapeutic treatments in the near future for this horrible disease,” Feng continues.

Read Next: Link found between depression and abnormal brain response to visceral pain in patients with IBS

Rolls looks forward to the new treatments the research could lead to. “The new findings on how depression is related to different functional connectivities of the orbitofrontal cortex have implications for treatments in the light of a recent non-reward attractor theory of depression.”
Note: Material may have been edited for length and content. For further information, please contact the cited source.
University of Warwick   press release