A more recent picture of my uncle and aunt ❤ ❤

My cousin, my baby brother and me. 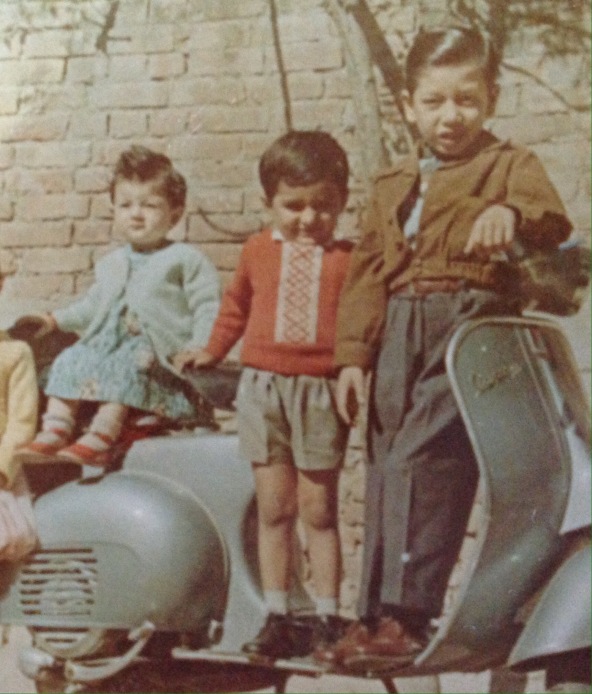 After my mom got divorced in 1965, I was just about 5 years old and my baby brother Farooq was not even 1 years old yet. After her divorce from my father, we went and lived with my aunt (who was my mother’s oldest sister and her husband) my uncle and their two children. My uncle, what can I say about him? He took me and my brother in just as if we were his own children. He singled out my brother, who was very traumatized by all the divorce proceedings and showered him with love. He took him on his daily walks, my brother rode on his shoulders 🙂 He bought him ice cream cones and jokingly told my brother not to say anything to us other children, and the first thing my brother did when they came back was say he’d had ice cream! :-)) He favored my little brother and showered him with love and affection, as well as all of the three of us too. We played Scrabble with him, I, still to this day, love playing Scrabble because of our times with my uncle. He took us on long walks with him, he took us to work (he was a journalist) and as a reward for sitting quietly while he worked, he would take us to Lintott’s, a bakery where we would get our pick of delicious pastries. The first time I realized how handsome he was was when I was 13 years old and my 14 year old best friend saw him and exclaimed “Your uncle is so extremely handsome!” And I looked at him with new eyes and thought, Oh yeah, he is handsome! To me, until that day, he had simply been my extremely loving uncle… 🙂

I think there was no better man than the tall, dashingly handsome, über loving, super intellectual uncle that we were fortunate enough to have. Dearest Amma Begum, thank you for marrying him!

He is 89 years old now and has dementia, and lately his health has been failing, he was in the hospital for a few days. He is home now, but not doing very well at the moment. My heart is hurting to think of my dearest uncle not doing well. I love him very dearly and hope he will recover completely, and soon. Earlier this year when we were in Pakistan, I told everyones that we will be back to celebrate my uncle’s 90th birthday in January of 2017. May my words be heard by the gods and come to pass.

4 thoughts on “My Dearest Uncle, On The Shoulders of a Giant”