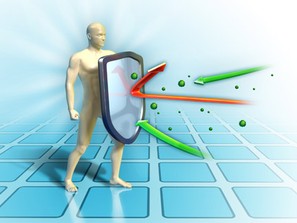 The absolutely AMAZING thing about the immune system is that our immune cells can rearrange segments of their DNA to produce millions and millions of different molecules (called T cell receptors and Antibodies) which can recognize and bind to foreign antigens and pathogens. This gives us the ability to recognize and destroy millions of pathogenic things such as bacteria, viruses, parasites, fungus, molds and allergy causing molecules. Think about how many disease causing organisms there are, millions of bacteria, viruses, parasites, fungi, molds, poisons. The immune system can form T cell receptors and Antibodies to recognize all of these and at least give a very valiant effort to get rid of them!

So the T cells and B cells and Dendritic cells, and macrophages and more kinds of immune cells can make molecules that will recognize foreign pathogens and foreign molecules. Then these cells will engulf the pathogen or allergy molecule and digest it or destroy it, thereby getting rid of the pathogen or molecule.

Same with life threatening allergies, for example a peanut allergy. The immune system goes out all guns blazing against something that is totally harmless like a peanut or other foods or even pets. Again steroids are used to suppress the immune system and for immediate treatment of allergies, epinephrine aka adrenalin is used to relax airways and tighten blood vessels.

(Just an amazing fact: Neutrophils, which are a part of the innate immune system, if they fail to phagocytize bacteria, they “spit out” their DNA and trap bacteria in these DNA nets, where the bacteria die.These Kamikaze neutrophils die as well!)

There are markers of inflammation which can be measured by blood tests. One such marker is C Reactive protein, another is increased levels of certain cytokines (such as IL12) another is simply white blood cell count. If any of the aforementioned markers are increased, inflammation is increased.

So what does that mean? Well it could mean that our white blood cells are reacting to something perhaps in the brain and that reaction causes depression to happen. It could mean the cytokines that increase when inflammation happens are causing mental illness. It could mean a plethora of things. Hopefully, scientists will find out what soon and discover a treatment for this cause.